What Is a Pioneer AVH 4200NEX and How Does It Work?

The 4200NEX is, in the simplest terms, an advanced car stereo that hooks up to your smartphone, the cool, fancy kind that you install yourself (or pay to have a professional install for you) to take the place of whatever regular stereo your car came with.

Units like this come with a ton of features and possibilities that standard-issue car stereos didn’t have before 2015, which is why so many people make the decision to shell out the money for an upgrade.

The technical term for this kind of stereo is actually “head unit,” and the purpose of a head unit is to provide an audio signal and act as the brains of the entire audio system. This stereo actually has the ability to connect and play back from quite a few sources, which is one of the things that makes it a popular choice among consumers.

There are an almost unbelievable number of different receiver units like this on the market, so for our Pioneer AVH 4200NEX review we’re going to go over the long list of features, what separates this stereo from the rest of the pack, price, reviews, and pros and cons. 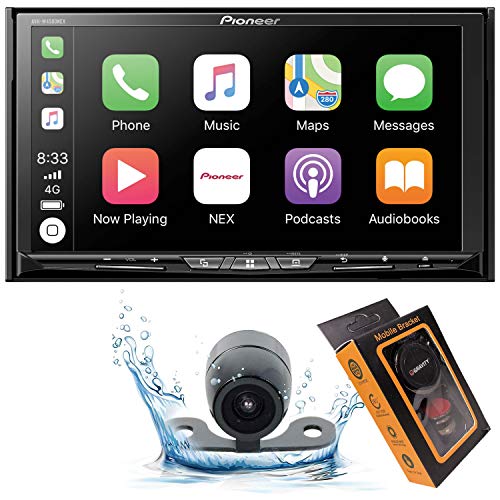 As a Pioneer product, the 4200NEX already has a place ahead of many other stereos simply because of the brand. Pioneer is one of the big three sellers of head units like this one.

While the company is more of a general electronics brand rather than specific to automotive audio, it is a market leader in the car stereo niche. Known for being innovative and introducing new products to the market ahead of its competitors, the brand has a reputation for quality, and this unit in particular is no exception.

Many stereos can’t handle doing more than one or two things at a time, but not so with the 4200NEX. It has several options for input and output, and so many compatible apps that, if it weren’t so user-friendly, it could be overwhelming. With regard to media alone, it can read memory cards, USB, CDs, and DVDs.

It can even play the video from the DVDs and route the signal to other screens in the car designed for that kind of display capability. Most other units can accept the DVD format but not play it, so this is a big step forward, as Pioneer is known for doing.

This unit also has two separate lines for cameras, which can connect to the vehicle’s lane correction and rear assist systems. Few similar head units have this capability.

In addition to being a Pioneer product, the 4200NEX is also a flagship product for the company and has a whole lot of good reviews behind it. It has been described as having a smooth and sleek design, with a user-friendly interface that doesn’t feel overwhelming or confusing.

There are buttons along the bottom of the screen that make it easier to access controls when the screen is in use with something else. Some users even said that a manual wasn’t necessary as they learned to use the stereo and play around with the different apps and settings.

Another thing that sets this stereo apart, even from other Pioneer brand units, is the NEX part, or “network entertainment experience.” It is a combination of cloud-based services and built-in features, an innovative move by Pioneer to implement popular apps and familiar interfaces.

The display is pretty special. Not only is it a generous 7”, but it is also motorized and detachable to foil any attempted thefts. With the ability to tilt to several angles, the screen can be manipulated for the best view.

The display has settings to choose from as far as colors, brightness levels, LED button colors, and the boot-up screen. It’s vibrant and performs pretty well in bright light (but not as well as some models), and the touchscreen itself is easy to navigate and fairly sensitive.

Apple CarPlay and Android Auto both work perfectly with this unit, with the voice controls and streaming services working pretty flawlessly. Google Maps worked better than Apple Maps, but the user interface for Apple CarPlay is the winner over Android Auto.

A lot of the sound quality your stereo will have does depend on the speakers already installed in your vehicle. For this reason, head units can only do so much, but the 4200NEX does a great job with everything it has the power to control.

The presets give you options to suit your tastes, and there are also tweaks you can make with the balance, fade, etc. The HD Radio is pretty impressive, as is the sound for DVDs, Bluetooth, and streaming, all of them putting out clear audio. The only complaint here is that the bass can be lackluster, and a subwoofer is recommended to boost up the bass and give it more power.

The cost of the 4200NEX falls around the mid to high level of pricing for double DIN head units of its kind, and its price is roughly $400-$700, depending on the seller, which is a pretty big price gap.

If you decide this is the stereo for you, shop around awhile and make sure you’re getting what you want. Some sellers have money-back guarantees or extended warranties, so don’t settle for the first one you find.

Even if you manage to find a good deal, $400 is still a lot to drop for a stereo unless you’re going to make the most of it and really appreciate all the features.

If CDs and regular radio are your comfort zone while you drive, it’s probably not worth it to spend the money on a unit this advanced. However, if you value good sound and lots of tech and integration options, this could be a perfect choice.

Reviews for this product are overwhelmingly positive, with a majority of the rankings putting this product at the top of “best of” lists. There are even a number of rave reviews that praise just about every aspect this unit has to offer.

Again, the brand pops up as a serious pro in favor of this stereo. Pioneer is a reliable brand for quality, and it has plenty of documentation and reviews to back that up.

On the downside, the 4200NEX runs up against a common fault that other similar units also have: using an older processor to run new and demanding apps. This can cause glitches and other buggy software issues, as can be read about in the review sections of seller websites.

This also makes the processor lag a little bit, taking a few seconds to put through commands rather than instantly. The display and startup are also affected by this, making it slower than other systems.

Pioneer AVH 4200NEX Review: How It Compares With the Competition

There are dozens of other head units on the market, and many are even in the same league and price range as the 4200NEX. It manages to stay ahead of most of them, though, and is consistently recommended as a good option that will please most users.

There are a lot of options to consider depending on your personal tastes, but overall the Pioneer AVH 4200NEX is a good buy if you value the higher quality sound and extra features that this model offers over the other simpler, and much cheaper, models available.

It’s pricier than a lot of other brands and models, but it does have the features to back up the price and is a quality piece of tech. You probably won’t regret buying this head unit, and you’ll most likely have fun playing around with all the features and customizable settings to get it just how you like it.

If you want exceptional sound, excellent Bluetooth connectivity, and lots of features, this is a good option for you.

Online deals in particular pop up and fade pretty quickly, so it’s worth watching out and making regular searches for a deal if you’re set on buying this head unit.

Ryobi Garage Door Opener Review: Going Above And Beyond For The Ultimate Experience

CHI Garage Door Review: Offering a Solution for Your Needs

Best Car Alarm System Buying Guide: What Can It Do For You?

Car Alarm Installation: A Step-by-Step Basics For Your Security