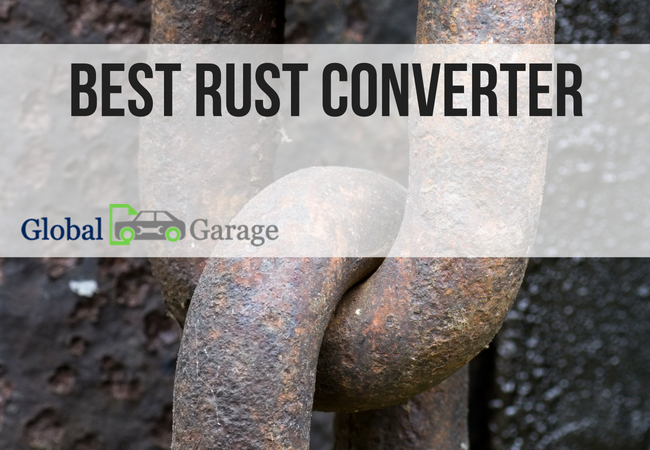 Figuring out which product is the best rust converter for you is not easy.

With a basic understanding of what rust converters are, the methods of application, drying time, cleanup, durability, toxicity and flammability, you will be well prepared to evaluate the various products on the market.

Five of the best are reviewed below.

Which Rust Converter Is Best for You?

When rust builds up so that removal is not good enough, you need a rust converter. These products penetrate the rust and bond with it. A new polymer compound results. This will remove the rust, protect from future rust and may serve as a base for further treatment.

The best product will depend on the job. If you need a rust converter that is heavy duty, go with the Corroseal as it is extremely durable and can be a great primer. Skyco Ospho may not be the best at rust converting, but it is the best metal primer. If you want something less toxic, Evapo-Rust is non-toxic, non-flammable and biodegradable. It is not a rust converter, and it cannot work as a primer.

Figuring out which product is right for you is not easy. Five of the best rust converters are reviewed. Professionals regularly cite Corroseal as a top product. Some suggest that it is worth the higher cost as it is a superior-performing product.

Its viscosity makes Corroseal stand out when compared to other products. While Skyco Ospho and TotalBoat have a viscosity that is nearly identical, Corroseal is much thicker. The thickness of Corroseal is an advantage in terms of performance. First, you will not have to apply as much as you will with other rust converters. In many cases, you will only need a single application.

Even with medium rust, it is rare that more than two applications will be needed. Skyco Ospho and TotalBoat generally require two applications or more depending on the amount of corrosion. Another benefit of Corroseal is that it bonds firmer and deeper with the rust.

Corroseal also protects the metal significantly better than other products. Corroseal is a special product as it maintains its protection without requiring some form of treatment. This product can protect from further rust for over a year.

While Corroseal works well with medium rust, it does not perform as well as some others with shingled metal. The thicker rust converter doesn’t fit as easily into the little areas between the rust flakes. This product has an easy cleanup with soap and water.

Corroseal does a better job of preventing new rust without requiring further treatment than a number of other products.

There are some negatives. Corroseal does not come in an aerosol spray can. It is fairly expensive. It requires more prep work than some other products. Each rust converter that is phosphoric acid based has a slightly different formula. TotalBoat Rust Primer is relatively thin, and it covers a greater surface area than other products reviewed. You will likely need multiple coats, but you should get coverage of up to 500 square feet from one gallon when applied to lightly rusted metal. This product can be applied as a primer to unrusted metal.

TotalBoat Rust Primer is toxic. The phosphoric acid that forms the base in this product is much more acidic than Permatex. You must use protective gear with this primer because a burning sensation and inflammation will result if it comes in contact with your skin. It is not VOC free, or biodegradable.

Permatex differs from many of the other manufacturers of rust treatment products by using a different chemical. Most products utilize a phosphoric acid formula, but Permatex uses a formic acid. This is less toxic than some other products, though it is not non-toxic. It is less hazardous in general.

Permatex will not provide protection for the treated metal as well as many of its competitors unless there are further treatments. Many phosphoric acid-based converters will hold up over a year without another treatment, but a Permatex-treated piece of metal may only last for six months.

Permatex cannot be filtered out following use and remixed with the remaining rust converter. This will activate the remaining product and decrease its quality.

Permatex makes it easier to further treat the project after the initial application. It can be applied from an aerosol can, and this makes application easier, much quicker and more precise. The Permatex rust converter dries more quickly than its competitors. It can be painted over in an hour or less, depending on the project.

The negatives with this product are that it is not effective at preventing new rust without further treatment. It is not available in large gallon sizes. Also, it is not reusable. Additionally, it is not as good as some other products for medium rust. The Skyco Ospho Surface Prep is similar to TotalBoat Rust Primer. By outward appearances, they seem almost identical. However, the two products have different formulas, so the response will be different. Skyco Ospho has a similar viscosity to TotalBoat, but it covers less area.

When proper preparation is done, this product will bond extremely well with light- and medium-rusted metal. Once it has fully bonded, it serves as a much better primer than most other rust converter products.

This product takes a long time to fully set, but this product will work even without excessive pretreatment ahead of time. Apply Skyco Ospho on medium-rusted metal, and you do not have to sand or grind down prior to application. It will not flake off.

This product can be reused if it is filtered. Protection without other treatments is not as good as with some other products. It is not non-toxic, biodegradable or VOC free. It is sold in only one size. Evapo-Rust further does not use an acid-based formula, which provides numerous benefits. For example, Evapo-Rust is non-toxic, biodegradable and non-flammable, one of the safest products available in the rust converter/remover market.

Many acid-based rust removers and some rust converters cannot be remixed. Evapo-Rust can be remixed with unused product without negative effects.

Another issue with this product is the amount of time it takes to work. On larger projects, you must regularly clean the surface and reapply for it to work. This means much more time and effort must be given with Evapo-Rust. This is the least-expensive product reviewed.

What You Should Know About Rust Converters

When you find rust on your tools or vehicles, you should want to remove the problem. There are several ways to address this, but using a rust converter is an easy solution. A rust converter is a liquid primer that is water-based that bonds with rust, forming a protective polymer outer layer.

A rust converter usually contains two active ingredients. Tannic acid is the first ingredient. It reacts with the rust and transforms it into iron tannate. 2-Butoxyethanol is the second ingredient. It provides a protective layer after tannic acid has performed its job

It is important for you to understand what specifically a rust converter is to be used for. Rust converters are not usually intended for use on bare metal, but some manufacturers have now tweaked their formulas to enable their use as a primer for bare metal. However, it will not give the same level of future protection when used this way.

A true rust converter should be applied directly on rust. These products will not work on substances without iron in them. These converters are ideal for use with rusting that is medium to heavy. If you are dealing with heavy rust, you will need to grind or sand the metal to be somewhat smooth.

In most products, rust converters are a fairly thin liquid and can be applied as a spray or with a brush. An aerosol allows even coating and efficient distribution without waste.

Different brands will be more viscous than others. There are advantages and disadvantages. A thinner product will spray much easier. However, thin rust converters will drip when too much is applied. Thinner rust converters often require multiple coats before all the rust is converted.

Thicker rust converter is much more difficult to spray. However, a product that is more viscous will adhere to the surface better and has less risk of dripping. Thicker product will also require fewer coats to treat the metal.

Drying times between 24 to 48 hours should be allowed for all rust converters. However, it is possible that certain rust converters can dry as little as one to two hours before being painted without adverse effects on the rust conversion, priming action or paint adherence. Your location can make this more or less relevant.

The active agent dictates whether cleanup will be easy or require significant effort. Phosphoric acid-based rust converters are more difficult to clean. The difficulty will depend on what surface is being cleaned. Some rust converter brands can be easily cleaned with soap and water.

Rust converters made from phosphoric acid can burn you if it contacts your skin. This is not a burn like nitric or sulfuric acid, so you should not need to worry about blisters or scarring. Direct contact with your skin can cause discomfort, inflammation and irritation. For protection, you are advised to wear rubber gloves when applying rust converter.

In terms of flammability, all rust converters are not equal. Some products include additives designed to make them non-flammable, including those with phosphoric acid serving as the active ingredient. Aerosol rust converters are usually flammable due to the nature of the product.

The Best Rust Converter For You

Now that you have a basic understanding of what the best rust converter is, the methods of application, drying time, cleanup, durability, toxicity, and flammability, you can evaluate the various products on the market. The product for you may be Corroseal 82331, TotalBoat Rust Primer, Permatex 81849 Rust Treatment, Skyco Ospho Surface Prep, Evapo-Rust ER012 or another fine product.