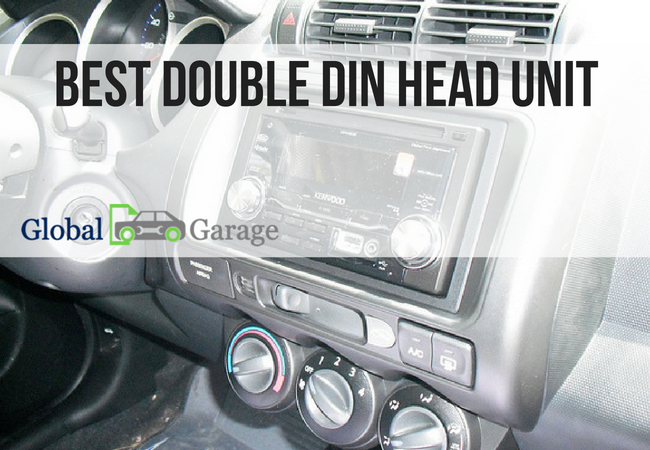 There is an almost overwhelming number of car stereos out there, and sorting through them all to find the one you want can be time-consuming and overwhelming. We bit the bullet and did a lot of the research for you. You get a more informed starting point for your own personal research of the best double din head unit.

First, a quick vocabulary lesson for those who have no idea what “double DIN” even means.

DIN stands for Deutsches Institut für Normung, which is German for “German Institute of Standardization.” In this context, DIN is the size of the opening in a vehicle that a radio fits into. German car manufacturers standardized the size of their car radios in the 80’s, and that has subsequently spread to be an industry standard. A single DIN is 2” x 8”, and a double DIN is 4” x 8”. All the radios in this article are double DIN size units.

So, now that we’ve got our terminology down, let’s dig into which stereos are at the top of the market and why.

The Best Double Din Head Unit: How We Chose Our Ratings

We put many research hours into bringing these results to you, and want you to be confident in our findings. Honesty and accuracy are important to us, so we sorted through a lot of sources to gather our information. We looked at reviews, testimonials, product reputation, and the data available about each unit we researched, to make sure we provide you with a thorough view of what options you have.

One of the three big manufacturers of car sound systems in the 1980’s, Kenwood is coming back again into the automotive audio system market. This model, in particular, works splendidly with a car’s existing speakers and is an audiophile’s dream.

It is user-friendly with a great navigation system and also comes with a two-year warranty.

One of the best double din head unit, this system includes a built-in, in-dash Garmin navigation system. Furthermore, it is both Apple CarPlay and Android Auto compatible and has built-in Bluetooth for streaming audio or hands-free calls. It includes a CD/DVD player with AM/FM tuner, built-in amplifier (22 watts RMS/50 peak x 4 channels,) HD radio tuner, the ability to play lossless FLAC audio files from a flash drive, and variable color illumination for keys.

It also comes with built-in iPod/iPhone/iPad controls and Siri Eyes-Free, depending on compatibility, built-in Android control, and Pandora and Spotify app controls through Bluetooth. The capacitive touchscreen is 6.95.” Premium audio brand Alpine manufactures this stereo that is geared specifically towards Apple products, including navigation with Apple Maps. One of the biggest features of this unit is the wireless Apple CarPlay that it was designed for. No cords are required as the receiver syncs with your iPhone.

It includes a digital media receiver with AM/FM tuner, built-in amplifier (18 watts RMS CEA-2006/50 peak x 4 channels,) has a 7” capacitive touchscreen, and built-in 5Ghz Wi-Fi for iPhone connectivity. Additionally, it is compatible with the Tunelt, Pandora, iHeartRadio, and Spotify apps, and comes with a USB port to accommodate devices. It also has 9-band parametric EQ, digital time correction, iDatalink Maestro Module to keep factory controls, and is steering wheel remote control ready. One drawback is that this unit does not play CDs. This is one of the best stereos for iPhone pairing, although it also pairs up well with Android technology. It comes from a brand that is very reputable with its audio tech, giving you high-quality sound.

This unit does not play CDs.

It comes with Apple CarPlay and Android Auto, both with voice control that makes it easy to give simple commands as you drive. A built-in amplifier (20 watts RMS CEA-2006/55 peak x 4 channels), EQ5 10-band equalizer, and subwoofer controls boost its capability for good sound. It is reverse camera ready, with rear USB, built-in Bluetooth, Dynamic Stage Organizer, 6.4” screen, and 18 FM / 12 AM presets. Additionally, it is compatible with Siri Eyes-Free and has Pandora controls for both Android and iPhone. It comes with a one-year warranty.

With a user-friendly interface, this Kenwood DPX592BT model also boasts CD and DVD playback and Apple CarPlay compatibility with a Lightning to USB connection, but it does not have Android Auto.

With a 6.2” touchscreen, this unit is compatible with Siri Eyes-Free control and iDatalink Maestro, as well as being SiriusXM Satellite Radio, Aha Radio, and Pandora ready. It has USB and HDMI inputs, built-in Bluetooth, preinstalled navigation, 13-band EQ with presets, and an internal amp (14 watts RMS CEA-2006/50 watts peak x 4 channels.) It is also steering wheel control ready, with a dedicated backup camera input, and can play lossless FLAC files from your flash drive. 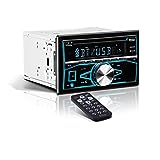 Another unit that only works with Apple, this one has a 6.1” widescreen touchscreen display that is easy to read due to the variable color and lets you access what you want quickly. The warranty is for one year.

One of the best units for Android pairing, this stereo can support two phones with the built-in Bluetooth. The NEX stands for “Network Entertainment Experience,” and is Pioneer’s unique combination of cloud-based services and built-in features. This unit is a high-end device with a more mid-level cost, making it a great value. It works with both Apple and Android phones, though it does not include navigation. 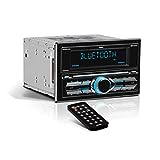 A great budget choice while still sticking with the popular brand, you’ll still get plenty of bang for your buck with this model. It is described as having a sleek, stealthy design that will complement most cars. However, it does not have satellite navigation.

Made by the company known for their great sound, this unit rates very highly in reviews and is a good buy in the low-level price range. It has easy-to-reach controls to go with the two-line easy-to-read display with variable color illumination.

With lots of features and options to customize the sound of your music, this unit is great for those who like to tweak their settings. Two phones can pair with the built-in Bluetooth with the dual phone connection.

It comes with a CD player that can play MP3, WMA, and AAC files, an AM/FM tuner, and a 13-digit variable color display. It has a 13-band parametric equalizer with 8 preset EQ curves and subwoofer controls, in addition to bass boost and loudness controls. With the Kenwood Music Play app, it can support Android music playback and has Pandora and iHeartRadio controls via the USB port. It is SiriusXM compatible, steering wheel control ready, and has front aux and USB inputs.

With Bluetooth for hands-free audio streaming and calling and a customizable variable color display with a 10-level dimmer, this unit provides two of the most popular features of car stereos.

It comes with built-in Bluetooth, CD player with AM/FM tuner, FLAC audio playback, and 3 RCA pre-outs. It works with Spotify and Pandora, is SiriusXM and Pioneer ARC App compatible, and has MIXTRAX for compatible devices. There is a front USB and aux, built-in MOSFET amplifier (14 watts RMS CEA-2006/50 peak x 4 channels), built-in iPod/iPad/iPhone controls, 13-band equalizer with 7 preset tones and 3-level loudness control, and it is steering wheel control ready with an adapter.

Now that we’ve gone over the top models and their general price ranges, let’s look into what will get you closer to the kind of unit you want to buy.

As stated above, some stereos are compatible with both Android and Apple products, but some cater to one or the other. Make sure you are getting a head unit that will work with your smartphone or other devices before you buy it.

Also consider what apps you want to use, such as Pandora, iHeartRadio, SiriusXM, and others. Your preferred app might not be supported on some stereos.

Do you want to be able to customize the color of your stereo screen and keys?

Some come with variable color screens and options that let you choose from hundreds of colors, while others may only have five. Some don’t have the option at all; you just have the color it comes with. The units themselves are typically black in color, but it might be possible to find something different if that’s something you want.

A CD or CD/DVD player is another feature that comes with many stereos, but not all. You’ll want to verify that the unit you like does come with a receiver for CDs and/or DVDs if that is something you require.

A lot of units have the capability to be hooked up to extra speakers, including subwoofers, if you’re looking for an incredible sound experience. Check to see what kind of outputs the stereo has, and its voltage limits.

Some units are easier to install than others, and some instruction manuals are better than others. Checking the reviews of a product is a good way to see if there have been issues with the instructions or not. YouTube videos can also be a valuable resource and can take you step-by-step through installing a double DIN head unit.

The more expensive, high-scale stereos tend to have navigation programs preinstalled, while the lower cost ones don’t. Likewise, some stereos offer turn-by-turn navigation, and some have the addition of satellite maps and images. If a navigation system is near the top of your list of desirable features in your unit, make sure to thoroughly research and find the one that will fit your needs best.

Do you need to be able to hook up your USB to the front of the stereo, or can you run a cord from the back? Units differ on where the input/output ports are, so double check that you’re getting a stereo that suits your needs in this way.

There are dozens, even hundreds, of double DIN head units on the market, and such a wide variety of features that it can be truly dizzying. Putting together a list of the top 3-5 features that you want most can help narrow down the list of contenders a great deal, giving you a more accurate selection to choose from.

Use this review as a guide to get you started, and go forth fearlessly in picking out the stereo of your dreams.